Here Jenny Cathcart describes the significance of the Henderson and Eadie Mill in Fermanagh and its tweed sample book.

An article by Amanda Harlech in The Daily Telegraph magazine on 22nd November 2014 describes how Gabriel ‘Coco’ Chanel, who had an affair with the 2nd Duke of Westminster in the 1920s, so coveted his tweed jackets that she set up a tweed factory in Scotland and by the 1950s tweed was a major element in her fashion designs. In the same period, Henderson & Eadie tweeds were being sent to leading fashion houses in Paris and they were designing a bespoke Lisbellaw tweed for the 5th Duke of Westminster, Gerald Grosvenor who lived at Ely Lodge Given the spirit of innovation that existed at the Lisbellaw mill at that time it seems regrettable that the firm, which warranted a visit from Princess Elizabeth in 1946, had to close in 1965, especially as tweed is trendy once more; tweed woven with ribbons of cellophane or embroidered with silk by Karl Lagerfeld at Chanel.

In John Vesey Grey Porter of Bellisle, John Henderson and John Eadie who came to Lisbellaw from Alloa in Scotland, found a landlord who, like them, loved progress. In 1858, the village was transformed by the presence of the Henderson & Eadie mill which provided employment and facilities such as a public swimming pool and a tennis court that was used by the villagers.
In 1902, the firm installed its own private telephone service linking the mill to the railway station and shops in the village. By 1907 Henderson & Eadie were using electricity which they generated at first by a dynamo and battery system and later by an electricity turbine purchased in Ohio, USA.

The Eadie family were motoring pioneers. Their first car, purchased in 1898, was a De Dion-Bouton with a 3 horse power engine. From 1st January 1904 when all motor vehicles had to be registered, Fermanagh’s first number plate, IL 1, was issued to the brothers William and James Eadie of Snowhill, Lisbellaw who displayed it on their Daimler four seater open tourer. Jane and Isabella Henderson were photographed being driven around by William Eadie whose grandson Roland, co-owner of the Enniskillen estate agency, Eadie & McFarland, still uses the number plate today.

Roland Eadie, invited me to his home at Aghavea Glebe to see examples of the firm’s high class products and to peruse family albums. I saw a specially designed brown and blue car rug which William Eadie ordered when he was 87 years old to match the interior of his new Jaguar car. Roland’s father, Ian, made a blanket for him in black and yellow Portora colours when he entered the Gloucester House junior school as a boarder.

-2-
Like Ian Eadie, Jimmy Henderson trained at the Scottish Woollen Technical College, later named the Scottish College of Textiles, in Galashiels. Both men joined the staff in Lisbellaw as designers, managers and directors of the company.

Our object, the sample and order book, belonged to Jimmy Henderson’s son, the late Jeremy Henderson. A noted artist, he had trained at the University of Ulster, and at Kingston and Chelsea Universities. His impressive paintings are perhaps influenced as much by the colours of the Lisbellaw dyeing vats as the hues and contours of his ancestral Scottish and native Irish landscapes.

During my conversations with Jeremy’s sisters, watercolour artist, Sandra Tweedie HMI and Mandy Bryson, Assistant Director Libraries, NI, I appreciated just how innovative Henderson & Eadie were, especially in the 1950s when they had the foresight to employ a leading Norwegian designer, Gerd Hay-Edie, to design contemporary throw rugs in eye-catching colours. They look back on their childhood in the mill house in Lisbellaw with affection and take real pride at the achievements of the firm which produced rugs, blankets and tweeds of world renown.

This Terracotta water cooler was made in Belleek. Its mark places it in the first period which means it was made sometime before 1891. This piece is significant in that it represents the beginnings of a pottery industry in rural Co. Fermanagh. 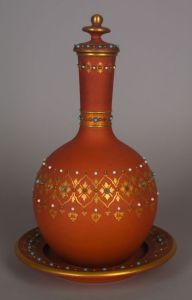 Lacemaking began in Ireland in the mid 19th century. The industry in Inishmacsaint was developed in the 1880s. Inishmacsaint needlepoint was entirely made by hand using a needle and very fine, locally spun, linen thread.

This appligue bedcover which is part of the museum’s collection is thought to date to between 1860 and 1890. The significance of the bedcover lies in the intricate detailing and symbols which include some masonic symbolism.

People have been mumming since the early 19th century. This hat is one of the original Aughakillymaude mummers hats from 1988. The colour and decoration are indicative of the winter season when mumming is most prominent. 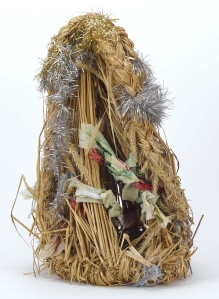 This earthenware, slab built with a slip coating and lead glaze’, this late 19th century object is referred to by people in the locality as a ‘replica of Florencecourt Castle’. Made in the Florencecourt Tile, Brick and Pottery Works.

Arney Brick is distincitive by its red brick which bares the marks of the grass which it lay on while drying. This indigeonous industry which flourishes in Arney dates back to the early 1800s. In recent years there has been a resergence in interest in the brickmaking of Arney through the Battles, Bricks and Bridges project. 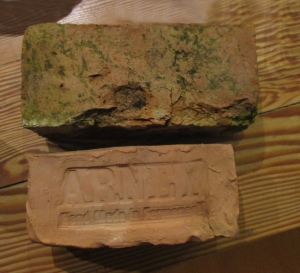 Knockmore butter was made in Derrygonnelly Creamery until it merged with other creameries in 1978. This butter box is indicative of the style of the time and dates to between 1923 and 1940. Knockmore butter was noted for its taste and the process by which it was made, stated that it was ‘untouched by hand’. 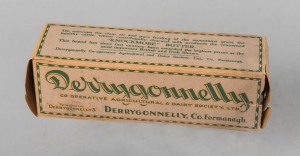 This Milk bottle from the Scotch Cooperative Society, Sligo rd, Enniskillen. Bottle reflects both the importance of agriculture in Fermanagh society whilst always telling the story of urbanisation and industrialisation in agricultural goods.

The Enniskillen townhall doors which were cratfed by woodcarve, William Scott graced the entrance of the new Townhall which opened in 1901.